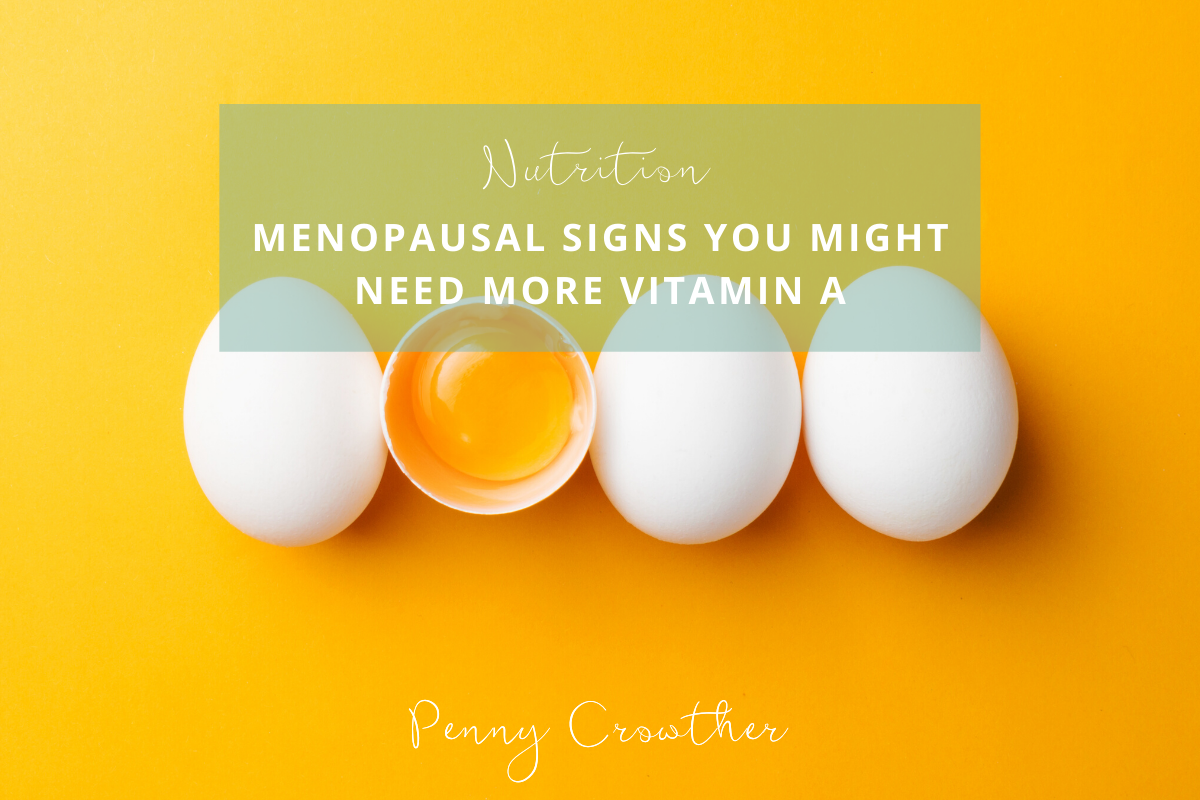 Vitamin A and the menopause

As we get older it is easy to blame a whole range of symptoms on the menopause. Chances are that vitamin A doesn’t feature on your menopause supplement list. Perhaps it’s time it did!

Lack of vitamin A affects vision, skin, bones, immune system and lungs. Did you know, for example, that the list of symptoms* below, which are often experienced in the run up to the menopause,  can all be linked with lack of vitamin A?

How common is vitamin A deficiency?

Lack of Vitamin A is more common than you might think.  But you probably haven’t heard much about it in the media. This is because deficiency in developed countries is considered rare. The same thinking used to apply to Vitamin D, but now it is known that most of us in the UK are not getting enough vitamin D.  Hopefully that same change of attitude is going to happen soon with vitamin A.

Vitamin A (retinol) is only found in animal derived food sources (cheese, egg yolk, oily fish and liver are the richest sources – yoghurt also contains some). Its cousin, beta carotene is found in plant foods, particularly orange and yellow fruits and vegetables and green vegetables. Your body should convert beta carotene into vitamin A.

So, in theory, if you eat fruit and vegetables which contain beta carotene you should be getting a plentiful supply of vitamin A. However, the truth is that whilst plenty of people do manage this conversion efficiently, there are many who don’t, leading to inadequate vitamin A levels.

Alcohol and vitamin A

Low fat diets are still popular for weight loss and this will lead to low vitamin A levels as this vitamin can only be absorbed in the presence of fat since it is fat soluble. Adding a pure vegetable oil such as flax or hemp oil or butter, to vegetables that are not hot will help absorption.

Low zinc levels will predispose to low vitamin A since these two nutrients work together. Zinc is found in meat, fish and pumpkin seeds. If you don’t eat meat or fish you might find it a challenge to obtain adequate zinc.

Some special functions of vitamin A

Vitamin A and Leaky Gut

If you are starting to find you are becoming more intolerant to certain foods, a leaky gut could be a factor. Vitamin A is an important factor in maintaining a healthy gut lining.

The lining of the intestine in its healthy state consists of densely packed cells like bricks in a wall. “Sheets” of bricks are joined together at tight junctions. If the gut lining becomes damaged (e.g. by toxins, drugs, food intolerances or parasites), it becomes too permeable allowing substances including partially digested food particles, to pass through the junctions in the gut wall into the blood. This then triggers an immune response. Leaky gut is a new research area. There are significant recent studies which suggest that a leaky gut is a major factor in auto immune diseases such as rheumatoid arthritis.

Vitamin A is vitally important in the metabolism of iron. In one of the earliest human studies, adults on a vitamin A deficient diet developed anaemia despite adequate iron intake.  The anaemia responded to vitamin A but not to iron.

So anyone with low iron should consider vitamin A supplements (especially if iron supplementation alone has not successfully raised iron levels sufficiently).

What to look for in Supplements

Look for Vitamin A (it will have some version of the word retinol next to it e.g. retinyl) on supplement labels. As an unfortunate result of scare stories and misinterpretation of the research concerning vitamin A, many UK supplement companies now use beta carotene and not preformed vitamin A .This means the majority of over the counter multivitamins available do not contain vitamin A.

How much vitamin A do I need ?

However it is going to depend very much on the individual, taking into account the factors above relating to vulnerability to deficiency. In many cases a higher intake may be required but this should be done under the guidance of a nutrition practitioner.  Caution is needed when taking vitamin A in pregnancy or pre conception.

Food sources of Vitamin A

The richest sources of pre formed Vitamin A are oily fish, liver, eggs and cheese. Yoghurt and meat also contain vitamin A.

The normal range for retinol in the blood is 28 to 86 μg/dL. However, testing for vitamin A is not particularly useful because deficiency will only show up when it is advanced and severe. This is because the liver stores large quantities of vitamin A.

The best plan is to have a one to one nutrition consultation to assess your vitamin A levels along with other vitamins and minerals and your diet, in the context of your overall health picture and symptoms. Call 07761 768 754 to book an appointment or email penny@nutritionistlondon.co.uk

This website uses cookies to improve your experience while you navigate through the website. Out of these, the cookies that are categorized as necessary are stored on your browser as they are essential for the working of basic functionalities of the website. We also use third-party cookies that help us analyze and understand how you use this website. These cookies will be stored in your browser only with your consent. You also have the option to opt-out of these cookies. But opting out of some of these cookies may affect your browsing experience.
Necessary Always Enabled

Any cookies that may not be particularly necessary for the website to function and is used specifically to collect user personal data via analytics, ads, other embedded contents are termed as non-necessary cookies. It is mandatory to procure user consent prior to running these cookies on your website.