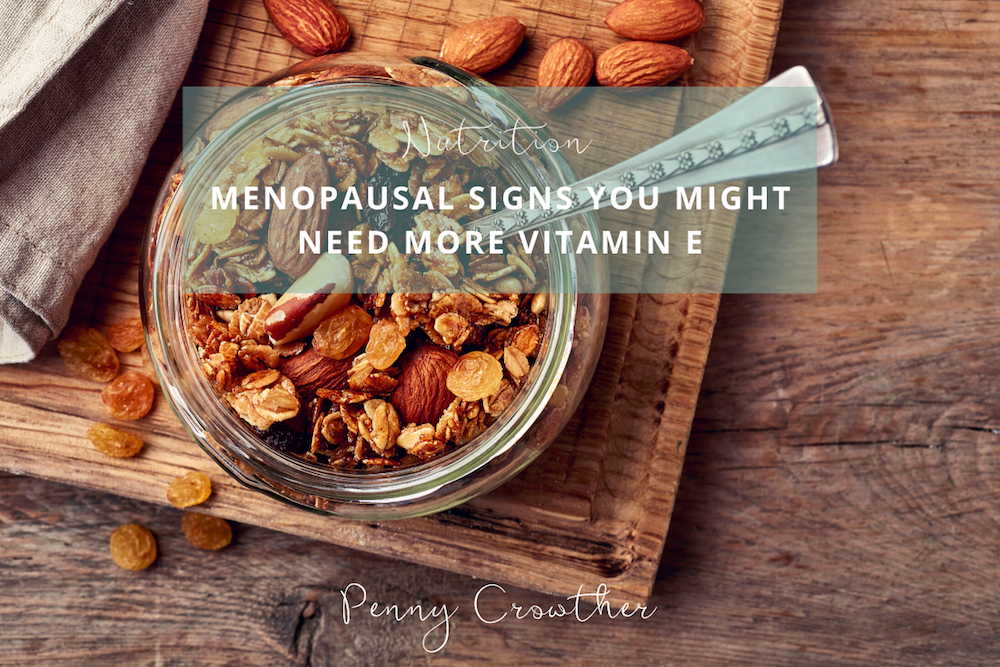 Are you deficient in Vitamin E?

Do you have any of these health issues, all of which are common leading up to and during the menopause?

If the answer is yes, you may need more vitamin E.

How to get more vitamin E

A study in 2012 found that over three quarters of Britons and Americans were obtaining less than the minimum government recommended daily intake of vitamin E.

So which foods provide most vitamin E? The best dietary sources are seeds, nuts, vegetable oils and avocado. Light and air destroy vitamin E so if you plan to get your vitamin E from vegetable oils such as sunflower oil, be sure to buy it in a dark coloured glass bottle.

The recommended daily intake of vitamin E is 15mg (22 iu).  To obtain that amount in one day you would need to eat, for example, one tablespoon (uncooked) sunflower oil, 23 almonds and 2 tablespoons peanut butter or an avocado. Low fat diets, which are still popular are at high risk of being vitamin E deficient.

What Are the Benefits of Vitamin E?

As it has an anti clotting effect on the blood, vitamin E is particularly helpful for heart health. With the decline in oestrogen during the menopausal years, goes an increased risk of heart disease.

Vitamin E is a powerful antioxidant. This means it protects the body from oxidation which occurs continuously through normal processes such as breathing, digestion, energy production, immune function, hormonal activity and the detoxification of harmful substances such as alcohol, drugs or pollution. These processes all produce destructive substances known as free radicals. Oxidative stress, which accelerates ageing and chronic disease, occurs when antioxidant supply in the body is insufficient to destroy the number of free radicals being produced.

Another important function of Vitamin E is its  effect on immunity, particularly in relation to infections. For example, in elderly people, higher levels of vitamin E in the blood correlated with a reduced number of viral  infections over a 3 year period.

Should I supplement Vitamin E?

Vitamin E is not easy to obtain in plentiful amounts in the diet as you have seen. However the answer to the question of whether you should take vitamin E supplements is not a simple yes or no! Nothing is ever simple is it?!

If you are thinking of supplementing, it is best to consult a nutritional therapist such as myself. I can make sure your supplement programme is balanced, not interracting with medications and is tailored to your particular needs.  Drop me an email penny@nutritionistlondon.co.uk

What you need to be cautious of  with vitamin E supplements

It is very important to bear these points in mind:

How to improve absorption of vitamin E

Taking your vitamin E with some healthy fat such as coconut yoghurt, avocado or nut butter will enhance it’s absorption and use in the body.  Vitamin E works best in tandem with vitamin C, so make sure your supplement contains some vitamin C as well.